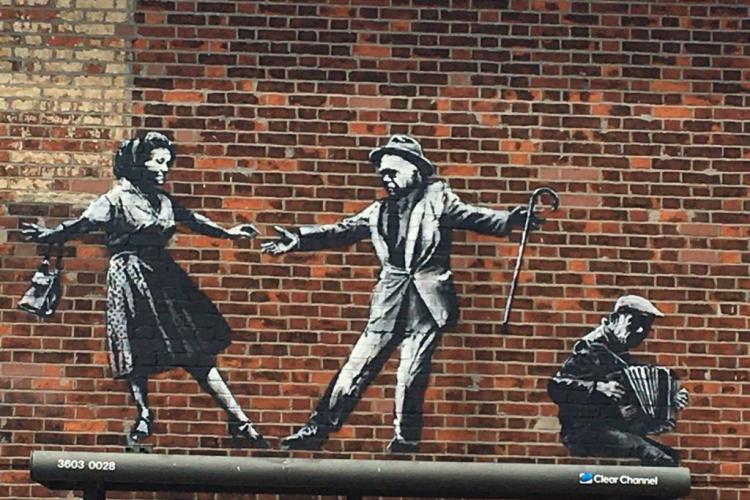 When the pictures first started appearing around town, here at the hotel, we were really excited. Was Banksy really on a staycation in Norfolk, and in Great Yarmouth in particular? Like so many other people, we jaunted down Admiralty Road to admire the dancing people on top of the bus stop and lots of the others, way before they were protected with perspex.

"They put scaffolding up round that bus stop weeks ago,"
"There's been men in high-vis all along there,"
"It's been broken for months, we thought the council were finally fixing it,"
"It's Banksy,"
"Nah, don't be daft, why would he come to Great Yarmouth?"
"You know what he's like, that chap from the model village, always jumps on a publicity stunt bandwagon, look what he did with the frogs,"
"Banksy never signs his stuff, it's a prank that model house,"
"The council have paid someone to do it, what with that culture bid thing."
"Banksy only ever does one, there's loads, it can't be him!"

But we felt quietly confident.

We felt really optimistic that Banksy would claim the artworks. After all, he's just as entitled to go on holiday as anyone, albeit of course we'd far rather he'd stay in the hotel than go driving round in the left-hand drive camper van you see in the spraycation film on the Banksy Insta account.

That said, once all was revealed, we did wonder if maybe Banksy might have stayed at the hotel as we had two memorable guests stay with us at about that time who were out all day, had big backpacks and zoomed round town on electric scooters, so maybe the camper van is another ruse to put people off the Banksy scent.

And whilst no-one knows what Banksy looks like or where he really stayed whilst in resort, we do know he likes an underdog. And he likes the Great British seaside too.

How do we think we know this?

For many years, the local Great Yarmouth private public partnership tourism body, the GYTA or Tourist Authority as it was affectionately known, before it became the Greater Yarmouth Tourism & Business Improvement District (or The BID for short) did a brave, really very obvious, but kind of strange thing.

They invited local politicians and local tourism business owners to get together and go on a study tour to other seaside resorts to see what they could learn. They crammed in altogether on a coach and visited seaside locations in mainland Europe, and to seaside locations all around the UK. They quite frequently stopped off at inland locations on the way. Trips always took place outside the main tourism season, as everyone was way too busy then. So they went just after Easter, or in October before half term.

Aileen was a founding member of the GYTA and she and Nick often went on the study tours. One such visit even inspired The Terrace to be built, just over a decade ago.

Sometimes it was quite challenging for the tourist office in the destination the GYTA wanted to visit to understand what GYTA we were doing and why. They just couldn't get the hang of what the GYTA wanted, it was such an unusual thing to do. The GYTA asked to meet opposite numbers, the local tourist officer, the councillors with tourism in their portfolios and of course local tourism business owners, hoteliers, restauranteurs and tourist attraction owners. They wanted to swap ideas and best practice, find out what other destinations did to deal with skateboarders on park benches, seasonal planting, bins, toilets, lighting, out of season tourism, and all sorts of other stuff. They wanted to learn how other resorts dealt with issues that they also faced, and exchange solutions and stories. It's a really clever and sensible thing to do when you think about it.

A couple of years after Banksy set up Dismaland in Weston-super-Mare in 2015, the GYTA took the Study Tour there to find out more. Everyone wanted to hear about the theme park built inside an abandoned swimming pool by Banksy in a seaside resort that possibly isn't top of your list of must-visit destinations, a bit like Great Yarmouth one could say. The group was interested to find out about the re-building of the pier after an enormous fire too. But it was a council officer who drew the short straw of going down to reception late one Friday afternoon to deal with a lady who'd been hanging around for ages wanting to speak to someone, and the events that he was able to talk about which had unrolled from this initial meeting, who held everyone's riveted attention.

And it was this story, as well as the pictures of course, which made us think that maybe, just maybe, Banksy had been on holidays to Great Yarmouth & Gorleston. And we were right.

Published by Imperial Hotel, within the category of Local Area and tagged with banksy, spraycation, Great Yarmouth, weston-super-mare,