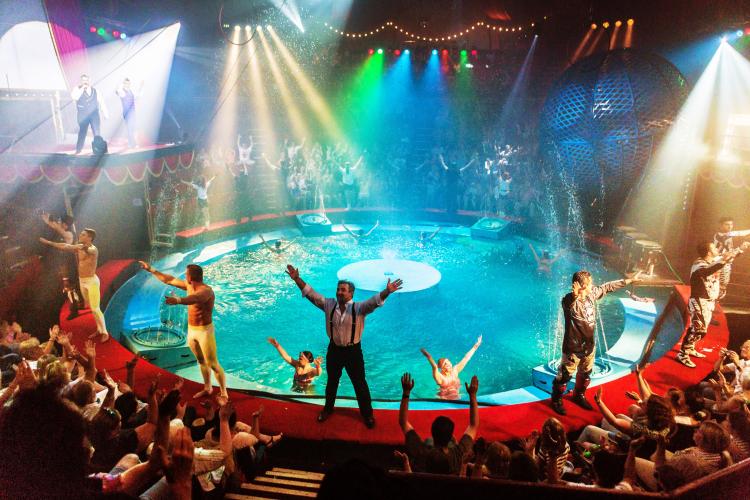 A seaside town with a love of entertainment

It's coming up to Christmastime and thoughts in Great Yarmouth always turn to panto and the Christmas Circus Spectacular. Great Yarmouth has a long tradition of blending seaside entertainment with the finest in circus and is home to the last 'total circus' building, just off the seafront. Great Yarmouth is also the birth place of Out There, now one of the UK’s leading circus festivals.

Philip Astley, a former Sergeant Major and veteran of the Seven Years War is considered the founder of modern circus. He brought popular entertainment to London’s South Bank in the late 1700s. With the disappearance of court theatres, venues quickly had to survive in a commercial world and Astley brought in the crowds with a popular mixture of clowning, trick riding and acrobats. By the mid-19th century, circus, both touring and in built venues, was firmly established with audiences nationwide.

In 1844 the railway arrived in Great Yarmouth, heralding the birth of its Victorian tourism boom. Only a year later, the circus came to town when Cooke’s Equestrian Circus erected a wooden circus structure on Theatre Plain. It was from this circus that Nelson the clown performed his ‘foolish exhibition’ that led to the 1845 Suspension Bridge Disaster on 2 May.  The clown planned to set sail along the River Bure in a washtub pulled by 4 geese. An under water line attached to a nearby rowboat would enable the feat to take place. Thousands of people gathered on the riverbank and bridge to watch when suddenly the bridge collapsed leading to deaths of 59 childrena nd 20 adults. Cooke’s Circus left shortly afterwards. Despite the disaster, the townspeople's love affair with circus was born.

The fascination with both circus and Great Yarmouth is perhaps explained a little by the late Valerie Hawkins, an amazing lady who ran a super little museum, and who had circus in her blood.

Between 1866 and 1874, various circus troupes performed in a a theatre built on Regent Road by Mr J Isaac, including the American circus Howes & Cushing. In 1876 a circus building was temporarily erected on Skinner’s Meadow on the corner of Nelson Road. In 1878 W&G Pinder’s Circus visited and built a new circus on the same site, but was also demolished when the land was acquired by the Yarmouth and North Norfolk Railway Company to build Yarmouth Beach Station. A circus was subsequently built on Victoria Road a few years later in 1881. Hired by various visiting circus companies, it had gone again by 1885. This swift coming and going of circus and other theatre buildings was fairly common across the country at the time as they fell victims of fire, failure or rapid urban developments.

Travelling circuses and their entourage of visiting showmen have continued to visit Great Yarmouth throughout the centuries, originally bringing with them animals as well as acrobats until the early 1980s. Many have put down roots in the area and now run static attractions to entertain visitors.

The Hippodrome has remained a consistent presence on Great Yarmouth’s seafront since it was built by showman, George Gilbert in 1903. Reputedly Charlie Chaplin and Harry Houdini graced its ring (one of only four in the world with the famous water feature). Closing only briefly during World War II when it was used by the RAF as a shooting range, the venue was taken over by the Jay family in late 70s. it's where Peter Jay of the Jaywalkers fame grew up and spent his formative years, always keen to become a drummer.

Peter's youngest son, Jack is the current Ringmaster and he presides over the modern vision of circus, with light shows and pop music. The Hippodrome hosts circus spectaculars during the school holidays in October, at Christmas, at Easter and from July to September over the summer months with performances daily from an international troupe of artistes. Great Yarmouth's tourist department made this great film about the circus a few years ago.

During the school hoidays when the circus is in action, matinee performances take place either at 1.30pm or 2pm and evening performances start at 5pm or 6pm, depending on the day. There's often time to squeeze in a quick lunch on The Terrace before a matinée performance, or dinner after the evening performance. Do let us know if you're planning on going to the circus when you book, the Christmas Spectacular is on selected dates from 11 December to 9 January 2022.

In 1999 SeaChange Arts presented their first circus show, ‘The Ring Cycle’ at the Hippodrome. This was just the beginning of a growing focus on circus and street arts projects in Great Yarmouth. In 2008 the Out There Festival made its debut, bringing a programme of exciting, innovative international circus to thousands of people in the streets, parks and venues across Great Yarmouth, and which now takes place in Great Yarmouth every year in September. The team behind the festival have developed a superb circus skills training school in town, to teach newer generations the tricks of the trade.

As well as circus, Christmas also means pantomime season! Jack and the Beanstalk will be taking place at at St. George's Theatre from Saturday 11 to Saunday 19 December. Mother Goose is the family pantomine on stage at Gorleston Pavillion from 8 December to 2 January 2022.

And from 23rd December to 2 January 2022, Aladdin will be performed at Great Yarmouth Town Hall.  It's challenging to include younger artistes in productions, and we're really pleased to be lending a hand and helping out with carrying on Great Yarmouth's great traditions of entertainment by sponsoring the young dance troupe from NAJAB.  Wishy Washy popped into the hotel to say hello and to highlight all our festive activities going on this year ...