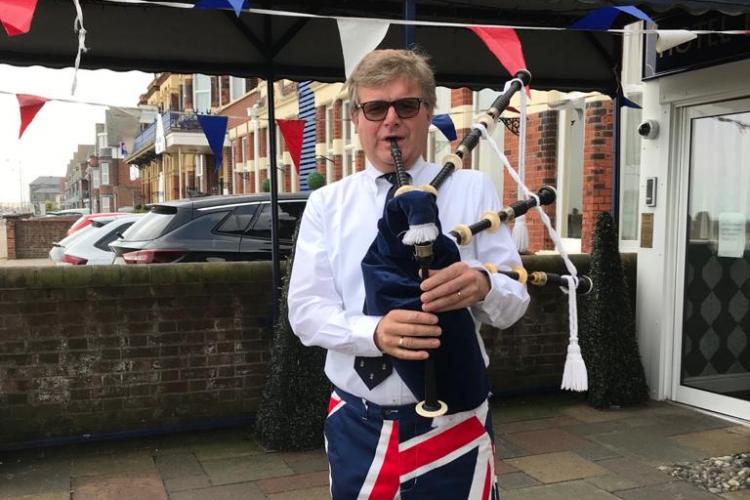 VE Day 75 - Bagpipes on the Balcony

We had all sorts of things planned to commemorate the 75th anniversary of VE Day on Friday 8 May and all weekend, with a fun 1940s themed dinner and dance with a really special 1940's inspired menu.

But sadly, our weekend break of celebrations and fun was not to be, due to the coronavirus crisis and the hotel being closed. But not everything was cancelled. With a week or so to go, Aileen persuaded Nick to dust down his bagpipes which hadn't been used since New Year's Eve, and to have a go at learning how to play 'Battle's O'er'.

'When the Battle is Over,' or "Battle's O'er" as it is known, is a 19th century air, composed by Pipe Major William Robb of the Argyll and Sutherland Highlanders, and performed on the bagpipes. Traditionally, the tune is played for soldiers when they are returning to their barracks or camp at the end of the day, and this has been the case since some time between the Boer and First World Wars.

Winton Churchill announced that the war in Europe was over on 3pm on 8th May 1945, hence the date and time chosen for pipers to play this song in 2020.

Luckily, Grant was on hand to record Nick's rendition of Battle's O'er, played from the balcony at the front of the hotel to quite a crowd of onlookers by the time Mr Mobbs had finished.

Nick found the bagpipes in his in-law's attic many years ago, and taught himself to play. The pipes usually make an appearance over Christmas and New Year at Imperial Hotel, and are an essential part of piping the haggis to the table.

The 75th anniversary of VE Day was a one-off date in the diary, and not the sort of date where celebrations can be postponed. As far as we know, there aren't any plans to celebrate the 75th anniversary of VJ Day which is on 2 September 2020, commemorating the date when World War II was finally over worldwide.

To give you an idea, below is the menu we had planned to serve, maybe it'll make a reappearance for the 80th anniversary in 2025...

Dickens Medal Pigeon
Warm wood pigeon breast, celeriac purée and remoulade, potatoe floodies and pickled radish
Did you know? White Vision, Winkle and Tyke were the first pigeons to receive the Dickens Medal for conspicuous galantry and devotion to duty whilst serving in 1943.

Roast Chicken with Lord Woolton-style vegetables
Succulent chicken with wartime vegetables in a cream sauce, roast parsnip, carrot. broccoli and Madeira jus
Did you know? Lord Woolton was the 1st Minister of Food, and establisher of the wartime rations system. The Lord Woolton pie was created at The Savoy by Maitre Chef de Cuisine, Francis Latry.

French Toast Fruit Cake
Cinnamon sugar, poached pear and milk sorbet
This eggless cake was the staple cake of the 1940s, made by housewives across the land.

Hershey Chocolate with Coffee & Tea
Hershey estimates that between 1940 and 1945, more than a billion of their D ration and Tropical chocolate bars were produced and distributed to soldiers throughout the world. By the end of World War II, the entrire Hershey plant as producing ration bars at a rate of 24 million per week.

Published by Imperial Hotel, within the category of General and tagged with VE Day 75, Bagpipes, nick mobbs,