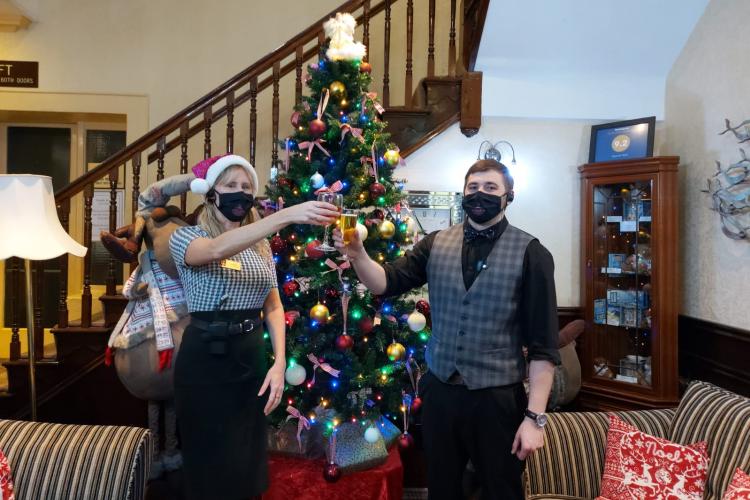 It's a rum old do this Covid rollercoaster. Just when you think it's maybe time to get back onto a vaguely even keel, Coronavirus, Boris and the scientists whip the rug out from under your feet! Christmas is certainly very different for everyone this year. And Norfolk enters Tier 4 today, Boxing Day.

To give us all some Christmas themed cheer and some tier 4 tomfoolery, Aileen has written one of her stunning quizzes - interspersing festive food fun with general Christmas knowledge. How many answers do you already know, straight off the top of your head?

Simply email your entry to us by 5pm on Monday 4 January 2021. The entry with the most correct answers will win a dinner, bed & breakfast stay-away for two.

And whereas consulting Google is strictly banned at a quiz night at the hotel, for this quiz you're free to phone a friend, ask a member of your household, or to do a bit of internet research to track down your answers if you really must!

Simply email your answers to events@imperialhotel.co.uk, to arrive at Imperial Hotel by no later than 1700 hours on Monday 4 January 2021. The prize will go to the person with the most correct answers. In the event of a tie, entries will go into a hat and a winner drawn. Perfect for a treat later in 2021 when we're allowed to open again.

1. What alcoholic sauce is usually served with Christmas pudding?

2. The Trafalgar Square Christmas Tree in London is given to the British by which country?

3. Often served at Christmas, what name is given to chipolatas wrapped in bacon?

6. In which ocean will you find the Austalian territory, Christmas Island?

7. What is the alcoholic ingredient in a Snowball?

8. If a person was given all the gifts in the song 'The Twelve Days of Christmas' how many gifts in total would they receive?

9. What country would you be in if your Christmas dinner consisted of rice & peas, chicken, oxtail & goat curry?

10. What Christmas item was invented by London baker Tom Smith in 1847?

11. Who created a Christmas Pudding for Waitrose in 2010 with a whole orange inside?

12. From which country does Saint Nicholas originate?

13. With turkey being unheard of, in which Asian country has KFC become the Christmas treat?

14. 'Christmas won't be Christmas without any presents,' is the opening line from which classic novel?

15. From which vegetable was Frosty the Snowman's nose made?

16. If you were born on Christmas Day, under which zodiac sign would you fall?

17. The French call it 'Buche de Noel', by what name does it go in English?

18. From which country was the turkey introduced into the UK in the 16th century?

19. Which fish is popular as a Christmas dish in Hungary?

20. What is the name of the German/Austrian yeast cake often served at Christmas?

21.What spice is usually used to flavour egg-nog?

22. Which Disney animation, based on a book by TH White, was first released on Christmas Day in 1963?

23. What is Lebküchen, something which is traditionally served in Germany at Christmas time?

24. In 'The Grinch who stole Christmas' why was the Grinch so mean?

25. What shape is the Belgium sweet bread 'cougnon' said to represent?

26. Who is said to have introduced the Christmas Tree to the UK?

27. What should be eaten on each of the Twelve Days of Christmas?

28. What were the names of the three wise men?

29. Of what is Norfolk Black a variety?

30. Which plant associated with Christmas has the Latin name 'Viscum Album' ?

31. Traditionally, what is hidden inside a rice pudding at Christmas in Sweden?

32. In which Bond film does the character Dr. Christmas Jones appear?

33. In which area of France would the Christmas meal be finished with 13 desserts to represent Jesus and the 12 disciples?

34. What Christmas item was first commercially designed by John Calcott Horsley in 1843?

35. A favourite for Christmas dinner, by what name do we know the vegetable Brassica oleracea?

36. What is the name of the Simpson's pet greyhound?

37. What would you expect to find in the middle of a Stollen?

38. What was traditionally mixed into the Christmas Pudding in the UK to bring good luck to the recipient?

40. Which is the only book in the bible to mention the arrival of the Magi at the birth of Christ?

41. Featuring among others, 'My Funny Valentine' and 'Bewitched, Bothered and Bewildered,' which Rodgers and Hart musical opened in New York on Christmas Day in 1940?

42. What is the name of the Italian sweet bread often served at Christmas?

43. In which year did Queen Elizabeth II refer to the previous twelve months as an 'annus horribilus'? (Note, this quiz has been written before her speech in 2020, so if she uses the same phrase again to describe this year, 2020 isn't the answer!)

44. What does Harry Potter receive from Dumbledore on his first Christmas at Hogwarts?

45. Born on Christmas Day in 1954, which artist had hits with 'Walking on Broken Glass' and 'No More I Love Yous'?

46. In which language was the carol 'Silent Night' first written?

47. What fruit is traditionally put in a Christmas stocking?

48. On which day was The Snowman first shown on television in 1982?

50. In which children's classic novel is it 'always winter, but never Christmas?'

51. And finally, please state 'yes' or 'no' or 'already on it' in response to the question: Are you happy for us to add your email address to our email marketing list and to receive email updates from Imperial Hotel?

Like a Mary Berry Christmas family jigsaw which is traditionally started on Christmas Eve and the last piece slotted in on Boxing Day, we hope that our Christmas quiz brings you joy, and anticipation that you could win a superb stay at Imperial Hotel.

We look forward to receving your entries and to contacting the winner in 2021. And we wish you all a very Merry Christmas and sincerely hope for a brighter 2021.

- There is 1 prize of 1 one night dinner, bed & breakfast stay for two adults available. The prize is as stated. There is no cash alternative. The stay can be taken from January to June, excluding Valentine's weekend, tier restrictions permitting.
· The quiz is open to UK residents aged 18 or over, excluding Imperial Hotel employees and their relatives.
· Closing date for entries is 1700 GMT on Monday 4 January 2021.
· Entrants must answer the questions by submitting their answers by email (or on a postcard if you really want) to events@imperialhotel.co.uk. Only 1 entry per person. Make sure you're confident before you press send on your email! Entries posted on social media will not be counted and might spoil the fun for everyone else.
· The email addresses of those entrants who answer 'yes' to question 51 will be added to Imperial Hotel's email marketing database. The email addresses of those entrants who answer 'already on it' will be retained. The email addresses of those who answer 'no' to question 51 will be deleted within 30 days, once the winner is notified and confirmed.
· The winner will be the person who correctly answers all questions, or in the event of a tie, the person whose entry is the first one pulled out of a hat.
· In the event of there being no winner, the prize will roll over to the next lockdown quiz.
· The winner will be informed by reply to their email entry within 7 days of the closing date. The winner will need to reply within 7 days to claim their prize. The winner's name will be announced on our blog and on social media.
· The winner’s name will be available on request.
· The promoter is Imperial Hotel (Great Yarmouth) Ltd.
· By participating in this competition, entrants confirm they have read, understood and agree to be bound by these terms and conditions.
· This promotion is in no way sponsored, endorsed or administered by, or associated with Facebook or any other third party.

Published by Imperial Hotel, within the category of General and tagged with christmas quiz, win, boxing day quiz, tier 4 tomfoolery,